A birthday wish for the CFPB: Strong payday loan protections

Payday loans often trap consumers in a cycle of debt due to lump sum payments, high annual percentage rates (APR), and little consideration of whether borrowers can afford to repay their loans. To combat this, the CFPB is developing new rules for payday loans. In an initial outline of the proposed rules, the CFPB proposed to require that lenders verify a borrower’s ability to pay back a loan while still covering basic necessities and existing debts, among other protections. Woodstock applauded the CFPB for taking a major step forward towards ending the cycle of debt, but urged the CFPB to remove a gaping loophole that would allow lenders to circumvent the requirement to verify borrowers’ ability to repay their loans.

“The CFPB has achieved great success over the past four years in protecting consumers, especially those most often targeted by wrongdoers – students; older Americans; servicemembers, veterans and their families; and the economically disadvantaged,” U.S. Senator Dick Durbin (D-IL) said. “I could not have been prouder when this agency was established by the Dodd-Frank Act to help curb the abuses and rigged games of the financial services industry. But we still have much work to do. For too many Americans, payday lenders offer a quick way to make ends meet, often with devastating consequences. Placing strong federal rules on payday lenders is the right thing to do. We must protect working families and prevent consumers from falling helplessly into debt traps.”

“We are very proud of the work the CFPB has done in the past four years,” Woodstock Institute President Dory Rand said. “Its work has brought justice to consumers by addressing unfair, deceptive, abusive, and discriminatory business practices and financial products that harm consumers. We will continue to urge the CFPB to pass strong rules to protect consumers in the payday, prepaid, and overdraft markets.”

Please watch the story below of one woman’s experience with payday loans: 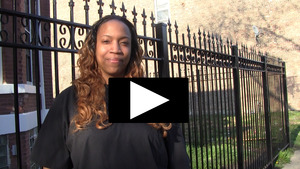 The video stars Christine Magee, a nursing assistant living in Chicago, Illinois. Christine took out multiple personal loans, including storefront payday, auto title, and internet payday loans. Christine fell into a cycle of debt and began using these loans to cover monthly expenses. This debt led Christine to file for bankruptcy and caused her credit score to plummet. Christine went to Heartland Alliance where she worked with Barbara Martinez to raise her credit score and find affordable housing. Christine now lives with her husband and children and has made great strides towards improving her finances. Christine said that if she could do it over again, she’d avoid the payday loan debt trap.

Christine’s situation could have been avoided if stricter payday loan regulations had been in place. Woodstock Institute has long advocated for stronger payday and small consumer loan regulations, including more thorough underwriting and a 36-percent APR rate cap. Currently, over 30 US senators support more regulations for payday loans, including Illinois Senator Dick Durbin. In March 2015, Sen. Durbin introduced the “Protecting Consumers from Unreasonable Credit Rates Act”, which would cap payday loan APR at 36 percent, encourage the creation of more affordable alternative small dollar loans, and create more specific penalties for the violation of the 36-percent APR cap.

Illinois Congresswoman Tammy Duckworth has also taken the lead on efforts to close loopholes in the Military Lending Act, which prohibits lenders from making loans with APRs that exceed 36 percent to servicemembers. Woodstock Institute thanks Sen. Durbin and Rep. Duckworth for their leadership.

The CFPB’s work has helped keep consumers safe for four years. Woodstock Institute applauds the CFPB for its accomplishments and its continuing efforts to ensure fair business practices and safe financial products for consumers. We urge the CFPB to strengthen its proposal on payday rules by closing loopholes that would allow lenders to make loans without determining the borrower’s ability to repay while meeting basic needs and other existing debts. Illinoisans, like Christine, cannot afford a payday rule that lets irresponsible lending thrive.