On Monday, Woodstock Institute released its first annual Illinois Community Lending Fact Book. The Fact Book is the first publication of its kind to compile data on mortgage lending for the largest metropolitan areas in the State of Illinois outside of the Chicago region. It includes data for:

For each region there is a profile which highlights and maps key trends in regional mortgage lending. Most significantly, the Fact Book contains data and maps on levels of high cost, or subprime, mortgage lending in Illinois communities. For the last decade there have been substantial concerns that minority borrowers, particularly African Americans, have been disproportionately targeted by mortgage lenders and brokers for high cost loans regardless of their credit quality. These high cost loans are often excessively priced, contain abusive features, or onerous terms which can lead to foreclosures. Table 1 shows the disparities in high cost lending levels for white and African American borrowers in the state’s largest metropolitan areas outside of Chicago. In Illinois, Kankakee has the greatest disparity with African Americans being 3.4 times more likely to get a high cost loan than white borrowers. The smallest disparity was in Bloomington-Normal where African American borrowers were two times as likely to receive a high cost loan as white borrowers.

The Illinois Community Lending Fact Book also includes data on housing market characteristics; information on trends in mortgage lending over the past six years; and a list of each metropolitan area’s top lenders. Additionally, a CD-ROM is included containing the data used to compile the Fact Book, so that users can create their own custom analyses.

“Access to fairly priced mortgage credit is a growing concern across the state” says Geoff Smith, Woodstock Institute’s Project Director. “We felt this was the ideal time to release a statewide Fact Book which will allow local community development organizations, city planners, and government officials to access previously unavailable mortgage lending data on their communities.”

Table 1. Percent of Loans that are High Cost to White and African American Borrowers, 2004 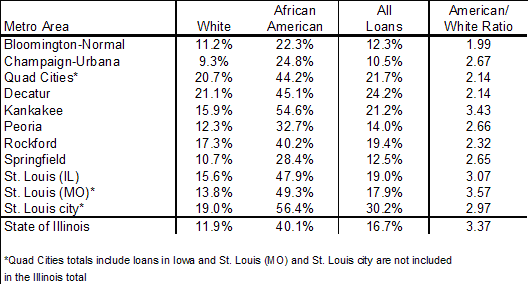