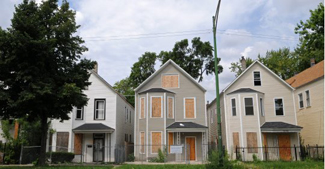 Last year, Podmolik exposed the phenomenon of mortgage servicers walking away from homes in the foreclosure process, leaving them to become eyesores with little oversight. In her  story “More banks walking away from homes, adding to housing crisis,” Podmolik drew upon Woodstock Institute research showing that there were nearly 2,000 “red flag” properties in the City of Chicago. She went to Roseland, where many red flag homes were concentrated, and found several red flag homes that went from stability to blight in just a few years. The story helped uncover a persistent but little-known issue that was threatening the health of many neighborhoods. Legislators began to take on the red flag issue later that year, and legislation enacting stronger maintenance requirements for servicers of homes in the foreclosure process was passed in Chicago and Cook County.

HUD-certified housing counselors have been on the front lines of the foreclosure crisis since the beginning. Counselors help struggling homeowners get a handle on their budgets, understand what resources are available to them, and navigate the confusing bureaucracy of mortgage servicers. They also help new homeowners prepare for buying a home and assist seniors considering reverse mortgages. When last year’s HUD budget zeroed out an important source of funding for housing counselors, many of which already have too much demand for their services, counselors across the country wondered how they would keep their doors open. Podmolik showed how Chicago area counselors were coping with the prospective cuts—some were moving to donated office space, others were laying off staff and cutting hours, and some even considered charging more fees for their services. The story demonstrated how decisions made in Washington can affect local efforts to lay the groundwork to prevent another lending crisis by better educating homeowners. Much of the zeroed-out funding was later restored, though not to original levels.

The factors that affect credit scores are a mystery to many consumers. Credit reporting agencies are not typically forthcoming with details on how they formulate the scores, even though they have a major impact on consumers’ access to credit. Podmolik highlighted important changes in the FICO credit scoring formula that would incorporate new information on payday loans, evictions, and child support payments into a score made available to mortgage lenders. The story captured the controversy over expanding credit report information by including perspectives from those who believed it could improve the scores of those with little credit history, as well as arguments that it could further limit access to credit for those who have faced financial hardship. The story helped consumers understand a complex issue that can affect whether they will be able to afford homeownership.

Please join us in honoring Mary Ellen Podmolik and her fellow Community Investment Awardees, Cook County Commissioner Bridget Gainer and Adam Gross of Business and Professional People for the Public Interest, this Thursday at the Community Investment Awards. The awards will be followed by a screening of David Sington’s documentary The Flaw, which unravels the roots of the financial crisis. There is still time left to buy tickets.