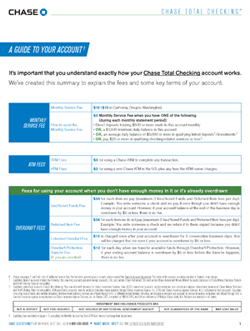 Chase was the first bank to adopt a shorter, simplified checking account fee disclosure form in December of 2011. (The Pentagon Federal Credit Union and North Carolina State Employees’ Credit Union adopted versions of the form in November 2011.) While the Chase form is three pages long, not one, it is a vast improvement over the usual 100-plus page document filled with fine print that most banks use.

Chase does a pretty good job of clearly identifying the most common types of fees on the first page of its three-page disclosure form. This page includes the following items included in the Pew form: monthly fee; requirements to waive monthly fee; ATM fees for using your bank’s ATM; ATM fees for using another bank’s ATM; insufficient funds fee; returned check fee; and, overdraft transfer fee. The Pew-recommended disclosure of a stop payment fee appears on page two of the Chase disclosure form.

Items recommended in the Pew form but not reflected in the Chase form include: minimum deposit needed to open account; account closing fee; and maximum number of overdraft transactions. Chase does include on page two of its form the maximum number of debit insufficient funds fees Chase charges per day (three charges of $34 each). Since some banks are now charging account closing fees, it would be a good idea to include this line in the disclosure form for comparison purposes even if a bank does not charge the fee. (Congressman Brad Miller of North Carolina has introduced legislation to prevent banks from charging customers fees to close a personal checking or savings account.)

Chase provides additional information about other fees on pages two and three of its disclosure form, including: Chase debit card coverage and fees; how deposits and withdrawals work; some other fees (stop payment and deposited item return fees); other ATM and debit card fees; statement services; wire transfers; miscellaneous; and, online banking services.  The information on how deposits and withdrawals work is particularly important because it helps customers understand how much money is likely to be in the account at a given time based on how the bank processes the deposits. This information is critical to avoiding overdrafts and insufficient funds fees. Chase recently settled legal claims relating to this processing issue and changed its policy from processing the biggest payments first to generate fees to processing deposits first, followed by payments in the order in which they were authorized, then all other items.

One area in which Chase should improve its disclosure form is the section on overdraft fees.  In the overdraft fee section on page one, Chase does not disclose that customers have a right to opt out of overdraft services.  At the same time, the Chase form states that overdraft protection transfer fees apply “(If you are enrolled)”. The Pew form suggests inclusion of a line stating “No Overdraft Service” with a related explanation that “If you choose not to opt in to any kind of overdraft service, transactions that would cause an overdraft will be declined at no cost to you.” Chase should include a No Overdraft Service line in the top or bottom of the section on overdraft fees and link to information on how customers can opt out. Chase should also insert a parenthetical under the overdraft fees heading on page one as follows: “(If you opt in)”.

While we remain concerned regarding the amounts of fees charged, we applaud Chase for taking steps to make its fee policies clear to customers and encourage other banks and credit unions to follow the Pew form and these examples. We urge Chase to make the changes recommended here as quickly as possible.