The Hardest Hit Fund is a federal program designed to aid homeowners who have experienced a significant loss of income through unemployment, underemployment, medical problems, or other reasons. In Illinois, homeowners can receive assistance through the Homeowner Emergency Loan Program (HELP), which offers forgivable loans to cover monthly payments and fees, or the Mortgage Resolution Fund (MRF), which buys delinquent loans from servicers and reduces principal so homeowners can stay in their homes. The Mortgage Resolution Fund has only recently begun to purchase loans, and has not reported much substantial data yet. You can read more about the Hardest Hit Fund program design and eligibility requirements at the Regional Home Ownership Preservation Initiative.

The Hardest Hit Fund seems to be delivering substantial relief to homeowners. The average size of a HELP forgivable loan increased by 10.6 percent from $7,904.80 in the fourth quarter of 2011 to $8,743.90 in the first quarter of 2012. Participants’ monthly payments decrease, on average, by more than half—from $1,111.72 to $493.31. While it is still early in the program, one way to judge its success is to examine the percent of participants who remain in their home after receiving assistance. Of the 39 participants who have participated in HHF for six months, 100 percent still own their homes. We’ll keep an eye on this number in the coming months as the sample size grows and becomes more meaningful.

Applications to the Hardest Hit Fund continue to expand as well. Accepted applicants doubled from 500 in the fourth quarter 2011 to 1,030 in the first quarter 2012. Thus far, nearly 6,000 people have applied to the HHF and about one in five is rejected.

The length of time it takes to process Hardest Hit Fund applications is getting longer compared to last year, IHDA data show. From the fourth quarter of 2011 to the first quarter of 2012, the length of time from the moment a borrower is declared eligible to the time they receive assistance has grown by nearly 50 percent, from 3.5 months to 5.2 months. The HHF’s goal is to process applications within 90 days. 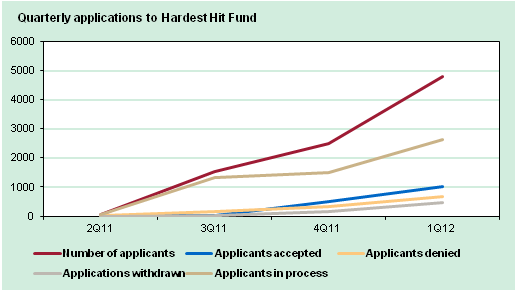 Housing counselors working on the ground with HHF have reported positive experiences working with the program. “Hardest Hit Fund is a much more streamlined program than other foreclosure prevention efforts, which means that it holds greater promise to provide meaningful assistance to struggling homeowners,” says Rob Breymaier, Executive Director of the Oak Park Regional Housing Center. “It’s beneficial to homeowners because they can keep their homes while getting back on their feet, it’s beneficial for counselors who can get compensated for their work in a timely manner, and it’s beneficial for banks that are able to receive a full monthly payment from a borrower who might otherwise become delinquent.”

Other foreclosure prevention programs, like the Home Affordable Modification Program (HAMP), have confounded homeowners and housing counselors with complex and opaque eligibility standards, resulting in qualified homeowners being turned away and unqualified homeowners being erroneously accepted into modifications that later had to be cancelled. Breymaier says the Hardest Hit Fund’s eligibility criteria are refreshingly straightforward and intuitive: “If a borrower qualifies for HHF, it’s rare that a lender will not accept the application.”

Is HHF reaching areas hard hit by foreclosures? IHDA releases only county-level HHF data, which makes it difficult to do nuanced analyses of the neighborhood impact of Hardest Hit Fund. However, the map below illustrates some general trends. It overlays a distribution of Hardest Hit Fund loans on a map displaying the number of foreclosure filings in Illinois counties as of March 2012. Please note that the dots on the map do not correspond geographically to the location of HHF loans, but simply display a relative distribution by county. 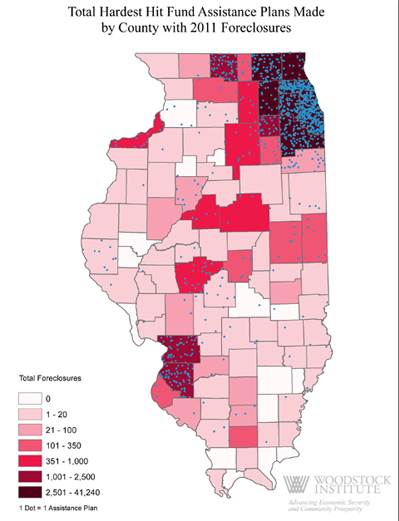