For example, if a customer has $100 in their bank account at the start of the day and, over the course of that day, spends $10 on lunch, $20 on hardware, $50 on groceries, $5 on a magazine, and $35 on a parking ticket, Wells Fargo would not process the transactions in that order. Instead, at the end of the day, Wells Fargo would re-order the transactions so that the groceries were processed first. See how the customer would pay $70 more in overdraft fees with the largest-first method than the chronological method: 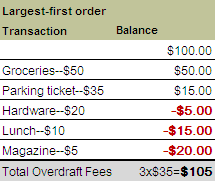 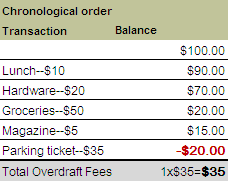 “Internal bank memos and emails leave no doubt that, overdraft revenue being a big profit center, the bank’s dominant, indeed sole, motive was to maximize the number of overdrafts and squeeze as much as possible out of [customers],” the judge wrote in his decision. He also noted that Wells Fargo went “to lengths to hide these practices while promulgating a facade of phony disclosure.” Customers were only able to find out about the practice of processing the largest transactions first after calling the bank to complain. Without adequate disclosure of how an overdraft program is structured, how are consumers supposed to modify their behavior to avoid fees?
Woodstock Institute has long opposed the counterintuitive and opaque method of processing the largest transactions first. This particularly impacts older persons, who pay $4.5 billion in overdraft fees each year, and lower-income consumers who live paycheck to paycheck. According to the Center for Financial Services Innovation, high hidden fees are the top reason that consumers choose to leave the banking system.
While the Federal Reserve Board recently required that banks get customers to opt in to overdraft protection programs for debit and ATM transactions, the new regulations do not address all of the problematic features. Elected officials and consumers should support the Overdraft Protection Act, sponsored by Rep. Carolyn Maloney in the House and Sen. Chris Dodd in the Senate, which would eliminate many of the abusive features of overdraft programs. The Overdraft Protection act would require written opt-in to overdraft programs, limit the number and amount of fees, prohibit transaction processing orders designed to maximize the number of fees, require prompt notification when a customer’s account has been overdrawn, and promote transparency for overdraft programs.
August 13, 2010 at 3:13 pm
Uncategorized
Tweets by @WoodstockInst