The petitions were delivered as part of a national movement during which over 160,000 Americans signed a petition from Americans for Financial Reform asking members of Congress to confirm Cordray let the CFPB continue to do its job of protecting consumers.

"Americans agree that Director Cordray is doing an excellent job of creating a more just financial marketplace," said Dory Rand, president of Woodstock Institute. "We can’t afford to let politics derail the CFPB’s efforts to protect consumers from the types of unsafe and unfair financial products and practices that caused the recession.“ 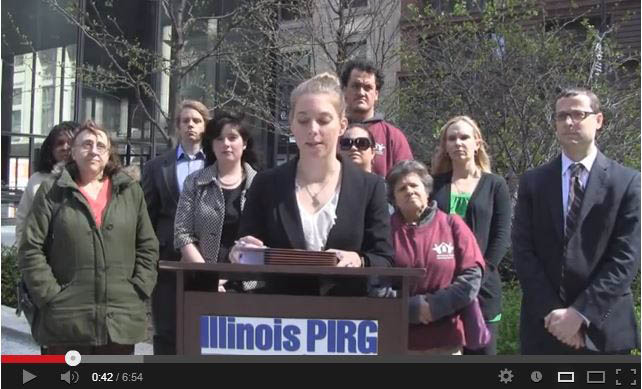 Click to watch a recording of the press conference

“The CFPB is the nation's first financial agency with only one job — to protect consumers in the marketplace.” said Brian Imus, State Director of Illinois PIRG. “Holding up Director Cordray’s confirmation only benefits big bankers at the expense of consumers by undermining the authority of the CFPB to do its job.”

Since its inception, the CFPB has already enacted reforms that curb the worst financial industry abuses and empower consumers to make better financial choices. It has:

Republicans in Congress have stated that they will not support the confirmation of Director Cordray—or any director—because they believe the CFPB should be lead by a board instead of a single director and want Congress to have responsibility for appropriating funds to the agency, subjecting CFPB funding to the influence of the powerful financial industry lobby. Senator Mark Kirk voted against Director Cordray’s nomination during a Senate Banking Committee in mid-March and continues to publicly state that he will not vote yes for the confirmation.

By law, the CFPB has limited ability to do the job it was created to do following the financial collapse in 2008 in the absence of a confirmed director, and this comes at a time when consumer debt issues have topped the list of complaints to the Illinois Attorney General for the fifth year in a row.

Petitions were be delivered to Sen. Kirk today with the ask that he commit to supporting Director Cordray’s confirmation. Organizations in eight other states are delivering signatures to their elected officials as pressure builds to confirm Director Cordray.