A lack of transparency in loan servicers’ decision-making processes often frustrates homeowners applying for help from the Home Affordable Modification Program (HAMP). If homeowners were turned away from HAMP, their servicer was not required until recently to provide more than a simple explanation—“missing paperwork” or “ineligible borrower” would suffice. If homeowners have reason to believe that they are eligible, the lack of specific denial information gives them little to work with if they try to contest the decision. Servicers are far from immune from making mistakes, after all.

A new tool just released by the US Department of the Treasury in accordance with the Dodd-Frank Act gives homeowners a little ammunition. When servicers are making decisions about who to approve for HAMP, they input facts about borrowers and their mortgages into a Net Present Value calculation (NPV). NPV helps servicers understand whether it would be more profitable for them to modify a loan or not. If modification turns out to be the best financial option and the borrower is otherwise eligible, servicers are generally required to offer the modification under HAMP.

Until recently, the public had very little idea what went into the NPV calculation. At the end of last year, servicers were required to provide borrowers with the inputs used in the NPV calculation and allow them to contest any of the inputs. A new web-based tool from Treasury allows homeowners to enter in their own information and see whether the NPV calculation developed by Treasury would qualify them for HAMP, giving them another resource with which to better understand the decision-making process and potentially contest an NPV-based denial.

Despite these key features, the website is loaded with jargon that may make it difficult for your average homeowner to easily understand it—who really knows what NPV is or how it affects you? The website could do a better job at immediately explaining the purpose and import of the NPV calculation and how it relates to the modification process. Hopefully Treasury markets this tool widely with a clear explanation of how it can help homeowners.

Another change in Treasury regulations will make it easier for homeowners to communicate with their servicers. Currently, homeowners may reach a different person in a different department every time they call their servicer, and those employees may not have accurate or complete information on their case and may give conflicting or inaccurate advice. Starting in September, servicers will be required to connect homeowners to a single employee who will manage the relationships in their case. Homeowners will be provided with a single toll-free phone number and email address for that employee. This change should significantly cut down on errors caused by crossed wires.

These program changes are welcome and the numbers have shown that improving HAMP can have real results. For example, this month’s report shows a marked improvement in converting trial modifications to permanent ones after Treasury required servicers to collect full income documentation before approving a trial modification (previously, servicers could approve trial modifications without a full set of income documents). More changes are necessary, however. The latest data show that 1 in 5 HAMP modifications are seriously delinquent one year later. This figure is much better than the industry standard: data from bank regulators show that 43 percent of all modifications, including non-HAMP ones, made in 2009 were seriously delinquent one year later. Nonetheless, it still means that a significant portion of loan modifications are at risk of foreclosure. We know how to reduce that risk: servicers need to reduce principal for underwater homeowners, and HAMP should require more principal reductions.

In the Chicago area, the numbers show that the Home Affordable Modification Program slightly increased the level of loan modification activity for the sixth month in a row (see our previous analyses). There were 37,599 active trial and permanent modifications in the region in March 2011, up 3.33 percent from last month’s 36,389. 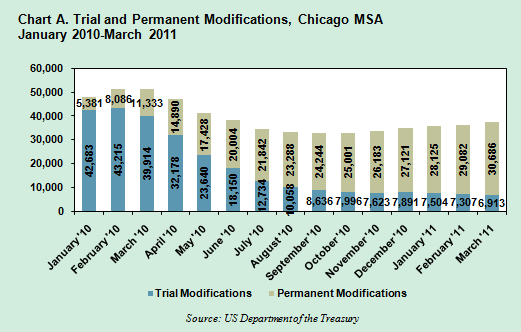 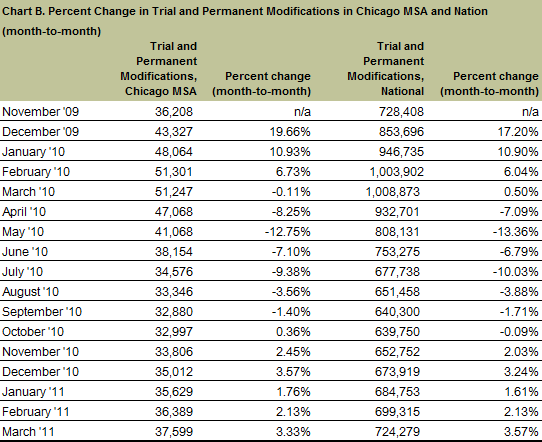