The data indicate that many of the new condominium foreclosures may be extremely concentrated geographically in large suburban developments. For example, filings on 98 condominium units in a single development in Northwest Cook County represented seven percent of the total condominium filings in that subregion in the first half of 2010 (see map below). Municipalities with the largest number and concentration of condominium foreclosures include Palatine, Schaumburg, Hoffman Estates, Wheeling, and Arlington Heights. 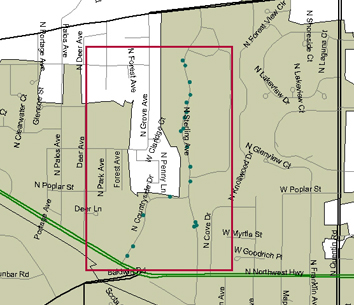 “Growing numbers of foreclosures on condominiums pose new challenges to those working to prevent foreclosures,” said Geoff Smith, Woodstock Institute Senior Vice President. “Security barriers and units occupied by renters can make it difficult to track down the condominium owner and inform them of available resources. Policymakers and community groups should work with condominium associations to facilitate communication with owners and keep them in their homes when feasible.”

“While new foreclosure filings continue to decrease in lower-income communities and communities of color, this does not mean that the foreclosure crisis is over in these neighborhoods,” Smith said. “They still must contend with high numbers of vacant properties that contribute to neighborhood destabilization and dampen already-weak real estate markets.”

A consistently high percentage of foreclosed-upon homes became lender-owned in the second quarter of 2010. An average of 95 percent of foreclosure auctions in the Chicago six-county region resulted in lender ownership of the home, compared with 93 percent in Kane County, 97 percent in Lake County, and 96 percent in Northwest Cook County.