HAMP continues sluggish pace, but we need to fix it, not nix it: January HAMP analysis

That’s why we oppose recent efforts to eliminate HAMP and other foreclosure response programs, like the Neighborhood Stabilization Program. Pulling out support to distressed homeowners at this juncture would be disastrous for neighborhoods trying to recover from the foreclosure crisis. Instead, legislators should focus their efforts on ways to make HAMP a useful, wide-reaching program with meaningful goals, such as requiring mandatory principal reduction when it is projected to be more profitable than a foreclosure and  offering assistance to unemployed homeowners.

We can’t afford to trust servicers to offer widespread, sustainable loan modifications on their own. For one, HAMP modifications have been shown to be half as likely to re-default as are servicer-run proprietary modifications; this is likely because proprietary modifications lack the affordability requirements of HAMP—some may even raise monthly payments. Secondly, it’s clear that servicers need a cop on the beat to hold them accountable—between the robo-signing scandal, poorly-run modification procedures, and questionable performance in securing and maintaining vacant homes, we should know by now that active enforcement of servicer accountability standards must be a key component of any foreclosure response.

Early information on the proposed robo-signing settlement authored by state attorneys general and bank regulators indicates that the settlement has the potential to make many of the necessary changes to foreclosure procedures. Leaked documents indicate that the settlement will include strong support for principal reductions, improvements in servicer communications with homeowners and housing counselors, and provisions to improve the accuracy of foreclosure documentation. We will continue to monitor the process and advocate for a settlement that makes the changes communities need to keep families in their homes whenever possible.

Looking at the numbers,  we found that the Home Affordable Modification Program has largely held the level of modification activity in the Chicago area stable this month—which is to say, too slow to keep pace with the level of demand (see our previous analyses). There were 35,629 active trial and permanent modifications in the region in January 2011, up 1.76 percent from last month’s 35,012. 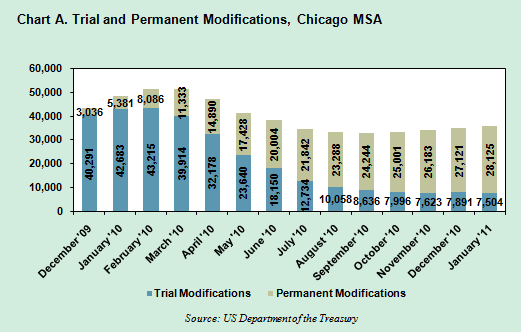 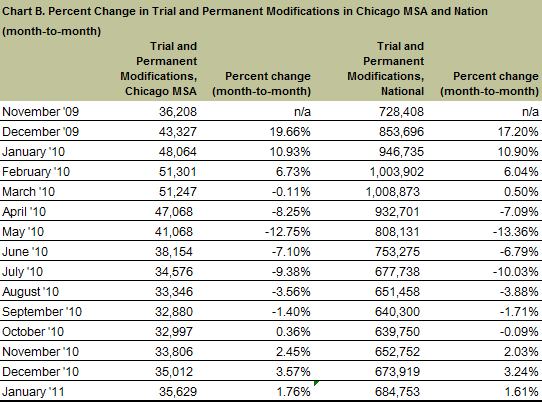