Nationally, total HAMP activity also fell by 7 percent from May to June. Permanent modifications rose by 14 percent while trial modifications fell by 22 percent. 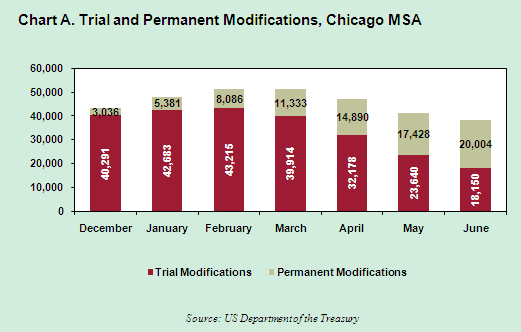 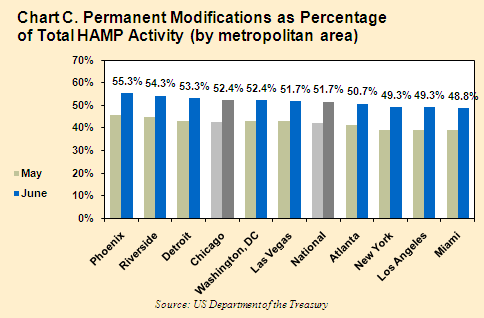 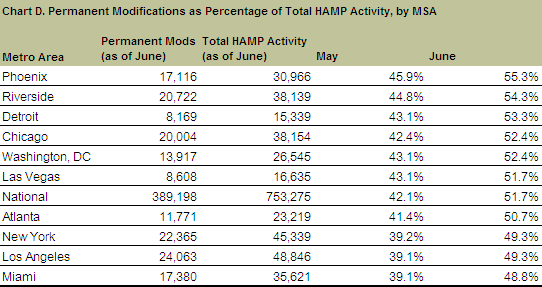 While permanent modifications continue to rise in the Chicago region and across the nation, recent reports call into question the long-term sustainability of HAMP modifications in the absence of widespread principal forgiveness. Underwater homeowners, who have loans worth more than their property, are much more likely to re-default. The GAO reported that borrowers with loan-to-value ratios of more than 150 percent, which means that they owe 50 percent more than their home is worth, are more than seven times as likely to go into foreclosure as borrowers with some equity in their homes. The report also notes that, troublingly, the average HAMP borrower has a loan-to-value ratio of 150 percent. This raises concerns about the likelihood of high rates of re-default in HAMP if changes are not made to the program that address the problem of underwater loans.

Treasury recently introduced the voluntary Principal Reduction Alternative (PRA) program to incentivize servicers to reduce principal for underwater homeowners. Servicers who choose to participate in PRA calculate the projected cash flow if a borrower’s principal is reduced to 115 percent of home value and compare it to the projected cash flow if the borrower is not offered a principal reduction. However, unlike standard HAMP procedures for loan modifications, the servicer is not required to offer the principal reduction if it turns out that it would bring in more money than if the borrower is not offered a principal reduction—they are simply required to consider it. The quarterly report to Congress of the Special Inspector General for TARP strongly recommends that Treasury make principal reduction mandatory within PRA in order to lessen the possibility of high rates of re-default, which some analysts project to be 65-75 percent under current HAMP guidelines. The report concludes, “At its core, PRA represents an opportunity to address a significant danger for HAMP—that modifications will fail and borrowers re-default because the borrowers are simply too deeply underwater, thereby wasting taxpayers’ money with little actual benefit.” However, Treasury has rejected this recommendation.