The Hardest Hit Fund is a federal program designed to aid homeowners who have experienced a significant loss of income through unemployment, underemployment, medical problems, or other reasons. Each state that received funding designed its own approach to meet the needs of this population. In Illinois, policymakers used HHF to create the Homeowner Emergency Loan Program (HELP) and the Mortgage Resolution Fund (MRF). HELP provides aid to struggling homeowners by offering a ten-year forgivable loan for up to $25,000 to bring their mortgages current by paying arrearages, penalties, and fines, as well as regular monthly mortgage payments. Homeowners must meet certain standards to be eligible for the program—for example, their income must be at or below 120 percent of the area median income. The Mortgage Resolution Fund will buy delinquent loans from servicers at a discount and reduce principal on the loans so that borrowers can stay in their homes. Currently, there is no data on the performance of MRF since MRF will buy its first pool of mortgages in the first quarter of 2012.

When the plans for HELP were announced, IHDA announced that the program aimed to help 15,000 homeowners. In the fourth quarter of 2011, 21,004 applications had been submitted to HELP, 2,499 applications were in the HELP process, and 500 had been accepted into the program (Fig. 1 shows new applications in various stages of the process each quarter). A slightly smaller number of borrowers had been denied (344), while the rest were still in process or had been withdrawn. On average, it takes 105 days—about three and a half months—for an application to proceed from the initial request to the granting of assistance. In contrast, one year after the Home Affordable Modification Program (HAMP)—a federal foreclosure prevention program—began reporting on its performance, 46 percent of its applications took more than six months to process. 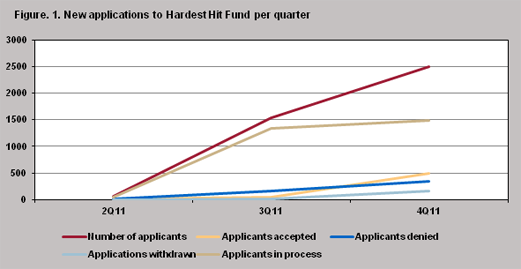 Data on the characteristics of homeowners accepted into HELP demonstrate that they are facing significant financial hurdles (see Fig. 2). More than 65 percent of HELP participants are more than 90 days delinquent on their mortgage. Additionally, negative equity—where a borrower owes more than the home is worth—is prevalent among program participants. When looking at the combined loan-to-value ratio, which reflects debt on first and second mortgages as compared to the estimated home value, just 34 percent of HELP participants have any equity in their homes at all, while 66 percent are underwater. Nearly half of HELP participants have loan-to-value  ratios exceeding 120 percent. Deeply underwater homes are at greater risk of going into foreclosure and becoming poorly maintained. 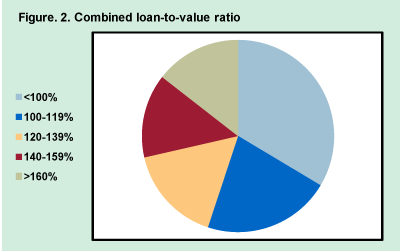 Despite the challenges faced by HHF participants, the program appears to offer homeowners a significant amount of aid. Program participants pay 31 percent of their incomes towards their mortgage payments, and HHF assistance covers the rest. As a result, participants’ monthly payments on their first mortgages have been reduced by 56 percent on average from $1,180 to $521. The median amount of assistance received is $7,904.

Will the Hardest Hit Fund provide effective relief to struggling homeowners or show disappointing results, like the Home Affordable Modification Program? It is too soon to tell as the program is still ramping up, but the targeting of a population in dire need of assistance, relatively quick turnaround time, and significant amount of assistance may bode well for the program’s prospects.  Woodstock will continue to monitor HHF’s quarterly reports to Treasury to see how the program scales up to assist Illinois’ unemployed homeowners, as well as how many of these homeowners are able to stay in their homes.