By Geoff Smith and Sarah Duda

Woodstock Institute previously reported that the number
of foreclosed properties reverting to bank ownership, or becoming Real Estate
Owned (REO), in the Chicago region increased dramatically between 2005 and
2007.i These types of properties are of particular concern because they are
likely to sit vacant until banks are able to transfer them to an owner who is
able to put them back into productive use. These properties have the potential
to destabilize communities by leading to declining property values, increased
violent crime, displacement of renters, and increased service burdens on
municipal governments. These properties are not evenly distributed across the
region; rather, they are highly concentrated in communities that are
predominantly minority. These are the communities likely to disproportionately
bear the impacts of vacant foreclosed properties. The following analysis examines
geographic patterns of and trends in REO properties that continue to impact the 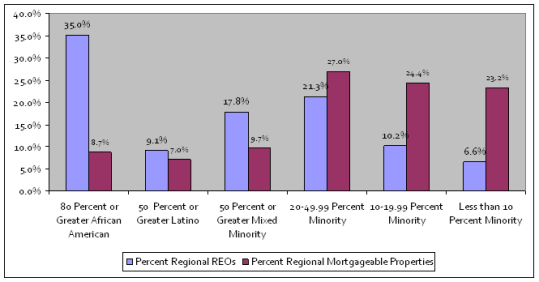 The largest increase in the number of foreclosures
becoming REO between 2005 and 2007 was seen in highly Latino communities.
Although the disparity between the regional proportion of REO properties and
regional mortgageable properties in majority Latino communities is small,
year-to-year trends illustrated in Figure 2 indicate that Latino communities
may be next in line as the most impacted by increasing numbers of REO
properties. Although the number of properties becoming REO increased
dramatically across the region between 2005 and 2007, majority Latino
communities saw by far the largest increase. In these communities, the number
of foreclosures that became REO properties increased by 464.7 percent between
2005 and 2007. By comparison, the
region as a whole saw an increase in REO foreclosures of 231 percent over the
same period. Census tracts with minority populations between 10 and 20 percent
saw a 315.1 percent increase in REO foreclosure auctions.  Census tracts with large African American
populations and communities with majority diverse-minority populations saw the
smallest percent changes, of 198.1 and 155.9 percent respectively. 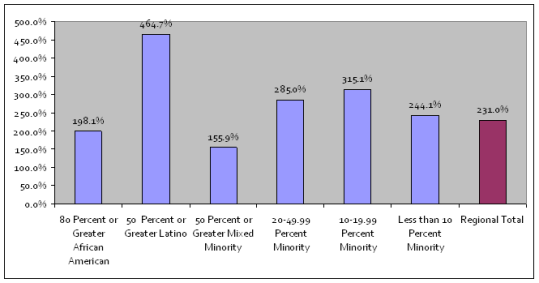 A significant percentage of properties entering REO
status in the City of ’s
communities of color were small multifamily buildings. Figure 3 illustrates
that, in 2007, 40 percent of properties becoming REO in the City of ’s 80 percent or
greater in African American communities and nearly 50 percent of properties
becoming REO in the city’s highly Latino communities were 2- to 6-unit
apartment buildings. Conversely, citywide 36.3 percent of foreclosed properties
that became REO in 2007 were on these small, multifamily buildings. Thus far,
lender and servicer behavior has suggested that they have no interest in being
landlords and, to this point, REO properties are likely to be vacant.iii As
such, the increase in REO properties has the potential to significantly reduce
access to affordable rental housing in communities of color. For more on the
impact of foreclosures on ’s
rental market, see Foreclosure Crisis Impacts Chicago’s Rental Housing Market. 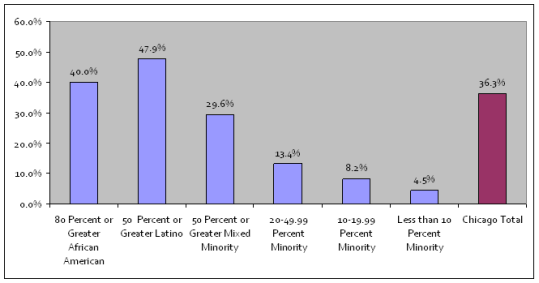 The increasing number of REO properties in the region as a whole
presents significant public policy issues. In addition to the devastating
impact that foreclosures have on individuals and families as a loss of shelter
and assets, foreclosures, through their associated vacancies, have been shown
to have a negative impact on communities through increased crime and property
value declines, among other issues.iv The concentration of REO properties in
highly minority areas should be of particular concern to advocates, municipal
officials, and policy makers. Many of the region’s communities of color have
been destabilized in the past by disinvestment.
Increases in vacancies are undermining the years of work done to rebuild
these communities and help their residents build assets.