In front of an audience of more than eighty attendees from government, nonprofit, and private sectors, key leaders and participants envisioned a future where all would have the opportunities and protections necessary to achieve economic security and prosperity.

Heather Booth, Executive Director of Americans for Financial Reform (AFR), energized the audience with her keynote on the successful efforts to date of the national financial reform coalition. AFR advocates for: formation of a Consumer Financial Protection Agency and a national systemic risk regulator; transparency and accountability for financial markets and regulators; derivatives regulation; and executive compensation reform. Booth recounted the crucial role of Illinois advocates, including Woodstock Institute and Citizen Action/Illinois, in advancing the CFPA through the House Financial Services Committee and getting harmful amendments withdrawn. Looking to the future, the Coalition plans to focus on strengthening consumer protection and financial reform policies as legislation moves through the House and the Senate.

Bank responsiveness to local needs in tough economic times is key to successfully reversing the tides of recession. A panel, moderated by Woodstock Vice President Geoff Smith, discussed local efforts to increase bank accountability on issues like the Community Reinvestment Act and the Making Home Affordable loan modification program. The panelists represented a diverse range of strategies and a laudable commitment to addressing economic development challenges in their communities.

David McDowell of the Southwest Organizing Project discussed their work to maintain homeownership on the Southwest Side of Chicago, recounting disappointing efforts to get large banks to modify loans in SWOP’s neighborhoods. McDowell displayed a poster showing the frightening number of foreclosures in zip code 60629 (see below). 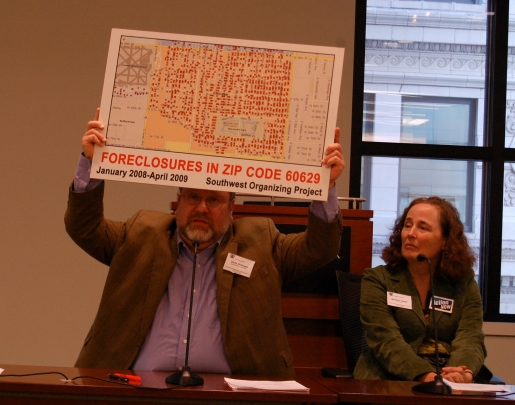 Madeline Talbott of Action Now works on maintaining homeownership in Chicago neighborhoods on the South and West Sides. She proposed some innovative solutions to the foreclosure crisis, including starting a microcredit co-op to buy up vacant properties in heavily distressed neighborhoods and re-selling them to original residents, and creating a foreclosure mediation program through the Cook County Circuit Court. Otis Monroe of Community Reinvestment Organizing Project and the Monroe Foundation discussed his community investment efforts that culminated in the Illinois State Treasurer requiring all depositories of state funds to certify that they provide financial services throughout their entire service area.

Quiwana Bell of the newly-formed Coalition to Save Community Banking described their response to the recent acquisition of Park National Bank by U.S. Bank. The coalition is requesting a hearing from the House Financial Services Committee to investigate the FDIC’s seizure of Park National and its impacts on the community, and calling for future changes to public policy regarding community banks in general.

If you would like to become more involved with Americans for Financial Reform or any of the Chicago-based advocacy groups, please contact us. We extend our thanks to all who were involved with making the Fall Forum a great success.