Permanent modifications are up from last year, but many homeowners still need help: July HAMP Analysis 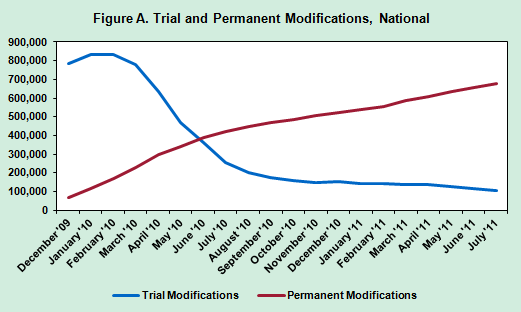 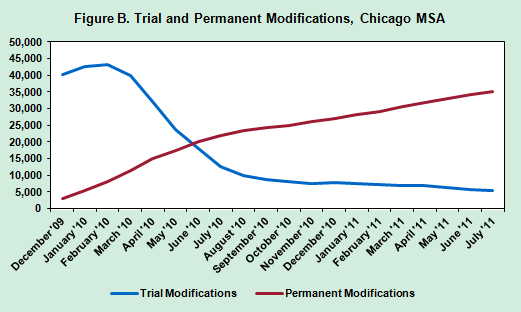 The switch to requiring full, up-front income documentation likely affected levels of permanent modifications, too. Nationally, more trial modifications converted to permanent after the June 2010 change than they did before the change. Of trial modifications that started before June 2010, 42 percent have become permanent today, while 75 percent of trials started in or after June 2010 became permanent. While there are no local data on conversion rates, local trends in HAMP activity closely mirror national trends, so conversion rates likely experienced a significant bump in the Chicago MSA as well.

While the growth in permanent modifications is positive since it shows that more people are being helped by HAMP, it does not necessarily show that the program is adequately meeting the needs of distressed homeowners.  For one, growth is to be expected in a new program as it is ramped up. Secondly, there are still large numbers of distressed homeowners who are not being helped. While there are no local data on the demand for HAMP, national numbers indicate that there are a substantial number of delinquent loans eligible for HAMP that are not being served by the program. Treasury estimates that there are more than 2.5 million loans in the U.S. that are eligible for HAMP, but there are only 781,525 active HAMP modifications—30 percent of the pool of estimated eligible loans. Given the similarity between national and local trends, it is likely that the Chicago MSA is experiencing a similar level of unmet demand.

Many homeowners who need help avoiding foreclosure are unemployed or owe more than their homes are worth. HAMP focuses on making monthly payments more affordable, which wouldn’t necessarily help someone with upside-down home values or a substantial loss of income. Widespread principal reductions are needed, as well as assistance for unemployed homeowners. In addressing improper servicing practices, the Obama Administration should develop and implement solutions that will stabilize communities and effectively address the current drivers of foreclosure.