Nationally, total HAMP activity also fell by 13% from April to May. Permanent modifications rose by 15% while trial modifications fell by 27%.

The Department of the Treasury released its eleventh report card on how mortgage lenders are doing modifying loans for eligible homeowners under the government’s Making Home Affordable program (see our previous analyses). 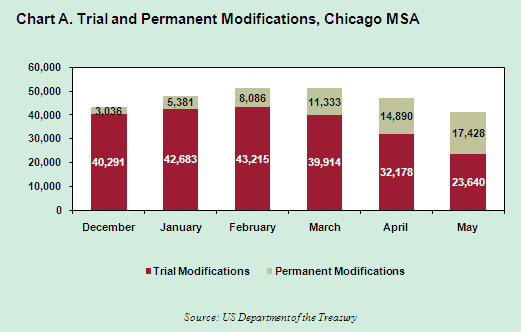 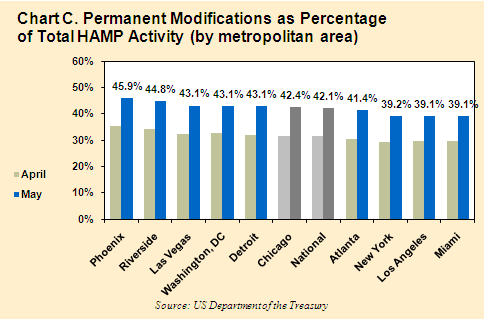 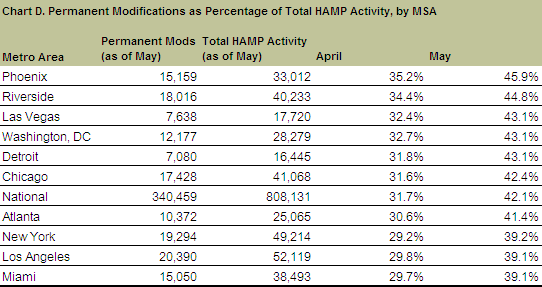 As we reported last month, the falling numbers of active modifications are likely due in part to the fact that many servicers did not require full income documentation before starting a trial modification; borrowers who do not qualify based on income are now being dropped from the program. Additionally, Treasury now requires that all servicers collect full income documentation before starting a trial modification, likely slowing the rate of new trial modifications.
New reports from the Government Accountability Office (GAO) and the Office of the Comptroller of the Currency (OCC)/ Office of Thrift Supervision (OTS) indicate that this new policy could yield better conversion rates in the future. The GAO analyzed conversion rates of 10 of the largest HAMP participants and found that the three servicers who required full income documentation before a trial modification had much higher conversion rates (ranging from 38 to 57 percent) than the seven servicers who relied on stated income (whose conversion rates ranged from 1 to 18 percent). The OCC and OTS Mortgage Metrics report found that permanent HAMP modifications perform better than modifications as a whole. Three months after the start of the modification, 7.7% of HAMP modifications are seriously delinquent, compared to 11.3% of all modifications. The report says that HAMP’s affordability requirement and requirements to verify income and complete a trial period likely contribute to these lower delinquency rates. Although data is still preliminary, this could indicate that HAMP modifications will be more sustainable in the long term and thus could have a larger impact on reducing avoidable foreclosures.
June 29, 2010 at 2:55 pm
Uncategorized
Tweets by @WoodstockInst