Vacant homes not only result in displacement and upheaval for a family losing their home—they have ripple effects on the communities that surround them. Woodstock Institute’s research has shown that vacant, foreclosed homes contribute to declines in neighboring property values and increases in violent crime. Costs can be substantial for municipal governments as well, particularly when it is unclear who is responsible for the maintenance of the home. We estimated that it costs the City of Chicago $36 million to maintain and process “red flag” properties, where mortgage servicers have started the foreclosure process and then decided not to complete it in order to avoid taking on the responsibility of maintaining and securing the home. 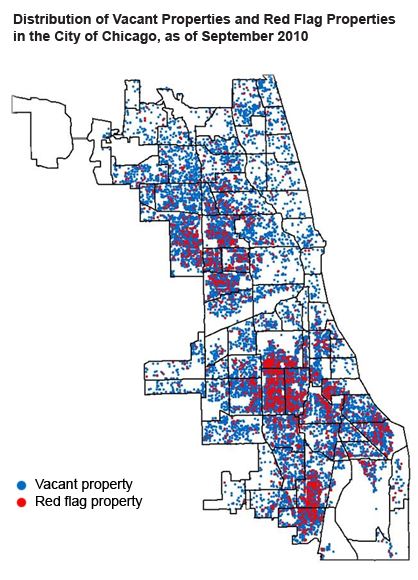 Foreclosure has contributed substantially to the vacancy problem in the Chicago region. When a home completes the foreclosure process and a homeowner or investor does not buy the property at auction, the bank reclaims ownership of the property—a status called Real Estate Owned (REO). REO homes are likely to be vacant. Preliminary data show that more than 20,000 homes in the Chicago six-county region completed the foreclosure process in 2011 and more than 93 percent of these homes became REO. This follows nearly 30,000 REOs in 2010 and more than 23,000 REOs in 2009 (you can find out how many foreclosures and REOs are in your town, Chicago community area, or county by exploring Woodstock Institute’s data).  Clearly, the foreclosure crisis is ensuring that the vacancy problem in the Chicago region isn’t going away anytime soon. 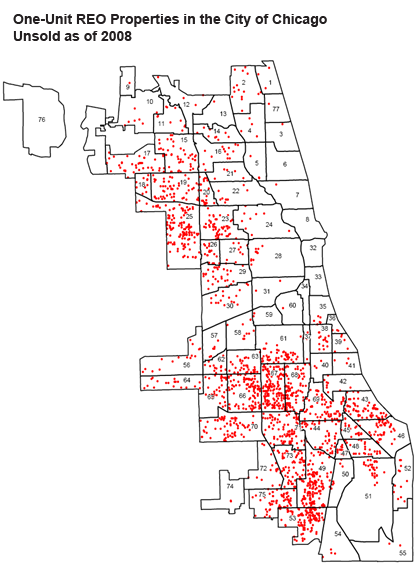 If these vacant, foreclosed homes were distributed evenly across the region, their effects might be easier to counteract. Woodstock’s research has shown, however, that foreclosures and vacancies tend to be highly concentrated in communities of color, which amplifies the negative impacts of vacancy and spurs disinvestment. One report found that 64 percent of Chicago’s REO properties are in African-American neighborhoods and these properties take 25 percent longer to return to productive use than properties in predominantly white communities.  When comparing the amount owed on the home to the price at which the home ultimately sold, REO homes in African-American communities lost more than twice as much value on average that did REOs in white communities.

With these lessons about the hardest-hit areas in mind, stakeholders from across the region are working together across political boundaries to target resources where they can be most effective. The Regional Home Ownership Preservation Initiative (RHOPI), a diverse coalition convened by Woodstock Institute that is working to forge solutions to the foreclosure crisis, has created a space for researchers, nonprofits, advocates, financial institutions, community groups, and local governments to share vacant property best practices, communicate vacant homes’ impact on the ground, and identify areas with significant vacant property needs. RHOPI’s collaborative spirit—through the vacant and abandoned buildings task force, co-chaired by the Metropolitan Mayors Caucus and Metropolitan Planning Council—influenced the formation of housing collaboratives in south and west Cook County, who work across borders to focus resources on hard-hit suburban areas that rarely have access to federal funding. The housing collaboratives will explain their innovative approaches to putting vacant and abandoned homes back to productive use later in the blog series.

Vacant properties are destabilizing communities across the region, particularly in communities of color. The City of Chicago and Cook County vacant property ordinances are some new tools to hold servicers accountable for their stewardship of homes in foreclosure, but it is clear that innovative and broad-scale solutions will be necessary to turn back the tide of vacancy. Keep an eye on this space in the coming weeks to learn more about how Chicago communities are tackling the vacant property problem.

Throughout January and February, Woodstock Institute is participating in a series on vacant properties in metropolitan Chicago hosted by the Metropolitan Planning Council. In the coming weeks, the blog will feature guests posts from elected and appointed officials, policy advocates, finance experts, and others about the many ways we are all working together to get a handle on this growing regional and national challenge.