Here at Woodstock Institute, we’re tracking the mortgage lenders active in the Chicago area to see how they’re performing on their commitment to reducing monthly payments for distressed homeowners. Check back here every month to see who’s getting better—or worse. Note: these numbers reflect the national portfolio of these banks, not just the loans in the Chicago area. Local data is not available. Treasury announced that 33,514 trial modifications have been started in Illinois, but data on the total number of eligible loans have not been provided.

Treasury recently announced a number of improvements to HAMP procedures, including increasing accountability and transparency. Servicers will now have to submit plans to reach a decision on trial modifications for which they have received documentation, as well as provide a modification agreement or denial letter to borrowers. Letters that provide a reason for denial will empower borrowers and housing counselors to challenge modification decisions based on erroneous information, which is an important corrective measure that has been largely unavailable until now.

Servicers who do not meet performance obligations will now be subject to consequences, such as fines. However, the effectiveness of this sanction will depend on the specifics of the performance standards in the Servicer Participation Agreement, as well as the severity of the repercussions.

Here are the results for performance through October 2009: 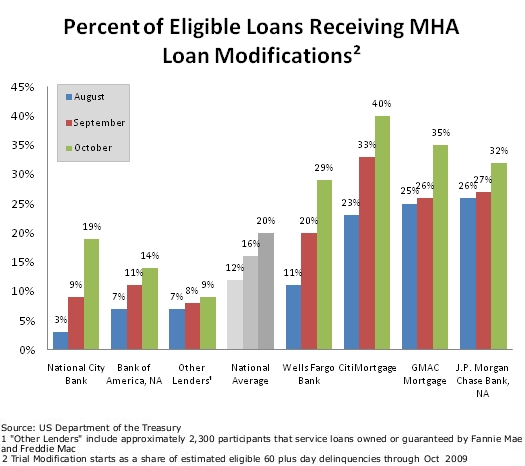 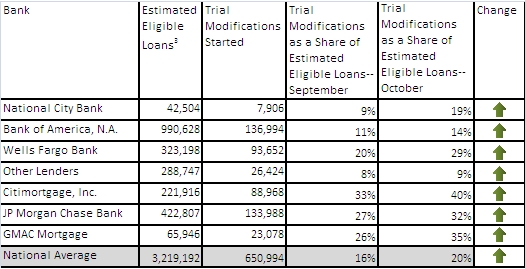