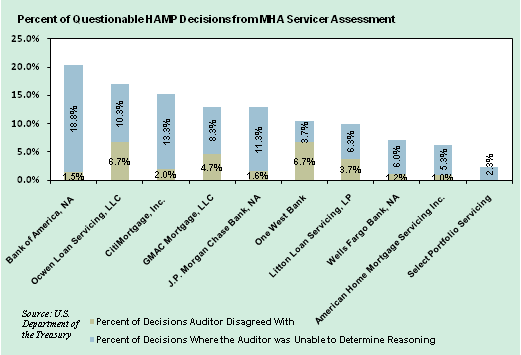 The first chart gives us an idea of the accuracy of servicers’ decisions about who to approve for HAMP. Through a process called “Second Look,” HAMP’s compliance agent, Freddie Mac, examines loans not in a permanent modification to assess whether the servicer correctly determined whether a borrower is eligible for a modification or not. In the performance assessment released with the latest HAMP data, Treasury reported on the percent of loans where Freddie Mac disagreed with the servicer’s decision and the percent of loans where Freddie Mac could not determine the servicer’s reasoning. Some of the largest servicers below, like Bank of America and CitiMortgage, made questionable decisions about HAMP eligibility 15 to 20 percent of the time. That leaves open the possibility of a substantial number of borrowers being needlessly denied from a program that could save their homes and stabilize neighborhoods.

Another measure from the servicer assessment raises concerns about eligible borrowers being turned away due to mistakes on the part of the servicer. As the assessment notes, “correctly calculating homeowner monthly income is a critical component of evaluating eligibility for [Making Home Affordable], as well as establishing an accurate modification payment.” Freddie Mac examined servicers’ calculations of borrower monthly incomes and found substantial errors among many of the largest servicers. The three servicers who had their incentive payments suspended miscalculated income on more than 1 in 5 loans, while Ocwen Loan Servicing made mistakes on 1 in 3 loans. That means that thousands of borrowers could have been denied from desperately needed assistance because their servicer erroneously thought they had too much or too little income. Borrowers could also be making monthly payments that are too high, raising the risk of defaulting on their loans again. 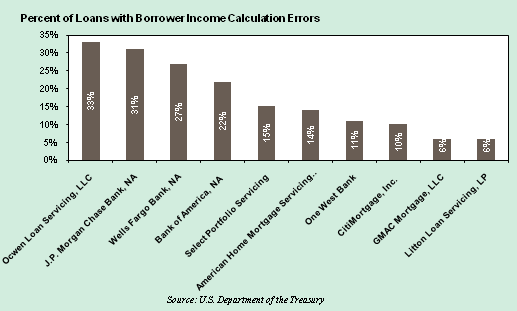 The servicer assessment revealed troubling and widespread errors that could seriously impact the success of HAMP and the likelihood that communities will recover from the foreclosure crisis. Treasury was right to withhold payments from the worst offenders, though many servicers have room for improvement. We urge Treasury to keep up the scrutiny on servicers to follow HAMP’s guidelines and treat homeowners fairly in the modification process.