What did these servicers do that was so wrong? We’ve heard the horror stories from homeowners, but Freddie Mac, which handles compliance for HAMP, performed a systematic review of the top 10 largest servicers’ performance and graded them on certain metrics. The metrics include the percentage of HAMP approval decisions that Freddie Mac disagrees with or is unable to determine the servicer’s reasoning, the percent of loans where the servicer’s calculation of the borrower income differs from Freddie Mac’s by more than five percent, and effectiveness of internal quality controls.

The results of the audit, included as part of this month’s HAMP report, are not good. For example, Freddie Mac found that Chase made mistakes calculating the borrowers’ incomes on 31 percent of the loans in the sample, while Wells Fargo made mistakes on 27 percent of the incomes and Bank of America made mistakes calculating 22 percent of the incomes (for reference, Freddie Mac’s benchmark was errors on five percent of loans or less). Income plays an important role in determining whether a borrower is eligible for the program, since mortgage payments must be higher than 31 percent of monthly income in order to qualify. That’s a huge fraction of homeowners who could have been unnecessarily denied the possibility of saving their homes. Additionally, all three banks got low scores for their internal controls for identifying and contacting homeowners, homeowner evaluation and assistance, and program management and reporting.

We hope that the withholding of incentive payments will push servicers to follow HAMP’s guidelines and substantially expand the number of homeowners they are helping. We also encourage Treasury to look for meaningful improvements in these servicers’ processes before restoring the incentive payments.

The result of these poor HAMP practices can be seen in the Chicago area’s underwhelming numbers of modifications. HAMP continues to grow very slowly, with 38,594 active trial and permanent modifications in the region in April 2011, up 2.8 percent from last month’s 37,599. 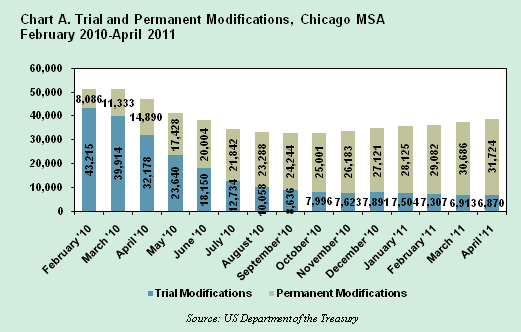 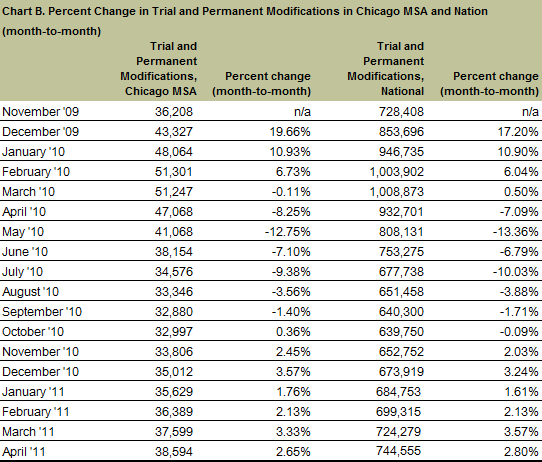