On its face, this sounds like good news, but it’s too soon to break out the champagne. It seems unlikely that the foreclosure crisis over when more than a third of Chicago region homes are underwater and unemployment remains persistently high.
There likely are a number of reasons behind the drop in new foreclosures. The number of distressed homeowners may still be high, but improving housing markets in some parts of the region may be leading loan servicers to pursue alternatives to foreclosure—such as short sales or deeds-in-lieu. These outcomes are preferable to a costly and protracted foreclosure process for both the borrower and lender but still result in people losing their homes. Also, the decline in filings coincides with the start of servicer compliance reviews under the terms of the National Mortgage Foreclosure Settlement, which may have slowed down the pace of foreclosure filings as servicers tried to ensure that all their processes were in order.
Our new foreclosure data also show that foreclosure auctions, which signal the completion of the foreclosure process, continue near record-high levels. Auctions fell by just six percent across the Chicago six county area, with over 16,000 properties being sold at foreclosure auctions in the region. Additionally, seven out of eight properties that are sold at auction become real estate owned (REO), or bank owned and are at risk of becoming vacant if they are not already vacant.
As has been true throughout the entire housing crisis, foreclosures are impacting some neighborhoods more than others—and those neighborhoods are largely low-wealth communities and communities of color. We illustrated the cumulative destruction the foreclosure crisis has inflicted on hard-hit communities in a series of maps of Cook County, one that shows the proportion of mortgageable properties that have gone to foreclosure auction and one that shows the percent of properties that have been vacant for more than two years. The maps are strikingly similar. The community area with the highest concentration of foreclosure auctions in the City of Chicago, Washington Park, also has the second highest rate of long-term vacancies. Woodlawn has both the third-highest rate of foreclosure auctions and the fifth-highest rate of long-term vacancies in Chicago. 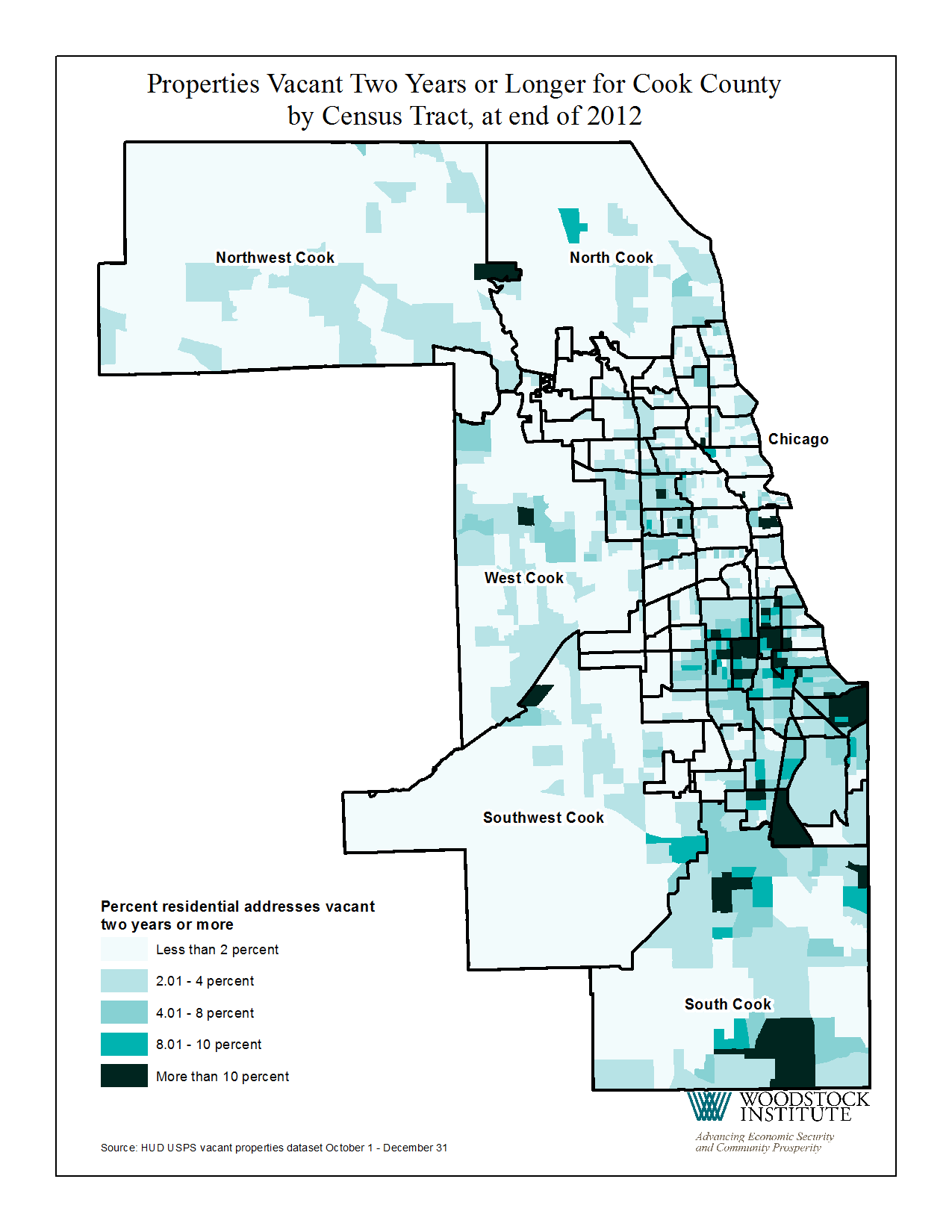 Click for larger maps
David McDowell, Senior Organizer at the Southwest Organizing Project (SWOP), told the story of how his community has been devastated by over a decade of foreclosures at our briefing. Shockingly, more than 13 percent of properties eligible for single-family mortgages in Chicago Lawn went to foreclosure auction between 2008 and 2012. Those persistently high levels of foreclosures have changed the fabric of the neighborhood. The rate of long-term vacancy in Chicago Lawn is nearly twice as high as in the rest of Chicago, and one three-square-mile area alone has 479 vacant homes. Chicago Lawn’s civic institutions have suffered as well. One school, Morrill Elementary, lost 40 percent of its population since 2006. McDowell emphasized that there are significant barriers to re-occupying vacant homes in hard hit communities. In Chicago Lawn, where homes currently sell for $70,000-$80,000, the cost of acquiring and rehabbing a long-term vacant bungalow that has sat vacant for more than a year can easily exceed $100,000.
It’s clear that the Chicago region still needs comprehensive solutions to address the ongoing foreclosure problem. The best solution for communities, homeowners, and financial institutions alike continues to be keeping families in their homes whenever possible. Woodstock Institute advocates for policies that would keep more homes occupied, such as bringing in a new leader at Fannie Mae’s and Freddie Mac’s conservator.  Fannie and Freddie hold most of the mortgages, and the current head of the conservator refuses to allow principal reductions for underwater homeowners despite the fact that they have been proven to be effective and beneficial for both homeowners and lenders. The Home Affordable Modification Program (HAMP) has spent just $5.8 billion of the nearly $30 billion allocated to the program, which is distressing given the level of need that remains. Woodstock is urging Treasury to make necessary changes to HAMP so that it can help more homeowners, such as allowing loans originated after 2009 to be eligible for the program, addressing the threat of interest rates that are about to rise sharply for early HAMP modifications, and releasing better data on which households are being served by HAMP.
We welcome your suggestions. Let us know in the comments what you think we should do to address foreclosures in the Chicago region.
August 16, 2013 at 2:35 pm
Uncategorized
Tweets by @WoodstockInst